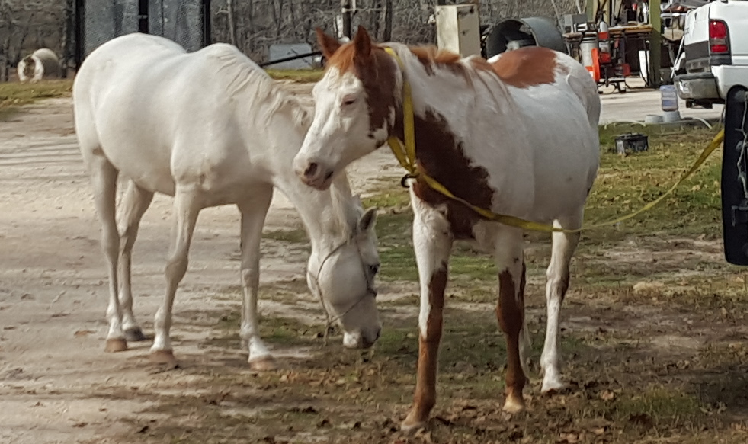 2 horses were found roaming down Waterwood Pass Drive towards the entrance of the neighborhood on December 21, 2015.

Both horses were unsaddled and walking at a moderate pace.  After they passed the intersection with Crystal Water, Joe “Jose” Hernandez began chasing after the 2 horses to get them off of the road.  Priscilla Yarbrough (soon to be Schmitt) of A+ Septic stopped to help as did 2 representatives from Sandy Oaks News.

Although both horses were reluctant to allow anyone to come close to them, the horses were quickly routed into the woods of a vacant property.

Hernandez was able to approach the smaller of the 2 horses, a brown painted horse, and put a noose made out of a tie strap around the horse’s neck.  The 2nd horse was willing to follow as Hernandez led the paint to his gated property to keep the horses corralled and safe.

Yarbrough called the Bexar County Sheriff’s Office who arrived shortly there after. 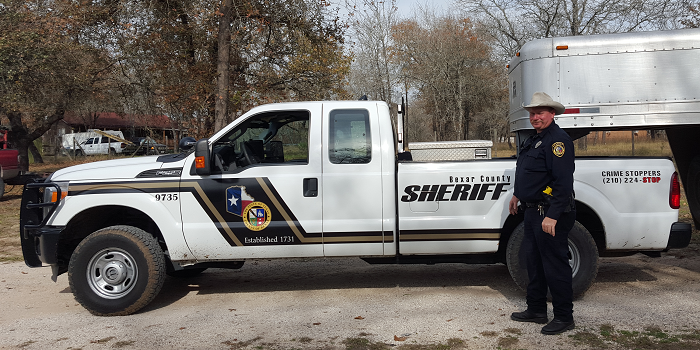 A short time after the horses were contained the County Sheriff’s Livestock Deputy, Bill Lohrke, arrived with a horse trailer.

The painted horse was easy to coax into the trailer, however the white horse was unapproachable and wouldn’t let anyone close enough to place a rope around its neck or attach one to its bridle.

Lohrke placed food in the trailer and waited for the horse to choose to go inside. 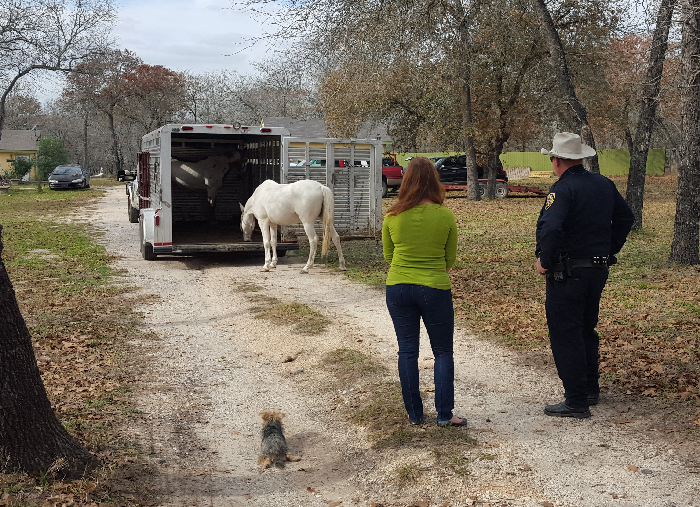 When the horse refused to enter the trailer Lohrke offered food to the animal directly.  The horse appeared to be interested, but wouldn’t go near the deputy.

Lohrke then feinted disinterest in the horse and turned his back on it and waited for the horse to approach him.  Once it did so he was able to gently attach a rope to the horse’s bridle and lead it into the trailer to join the other horse. 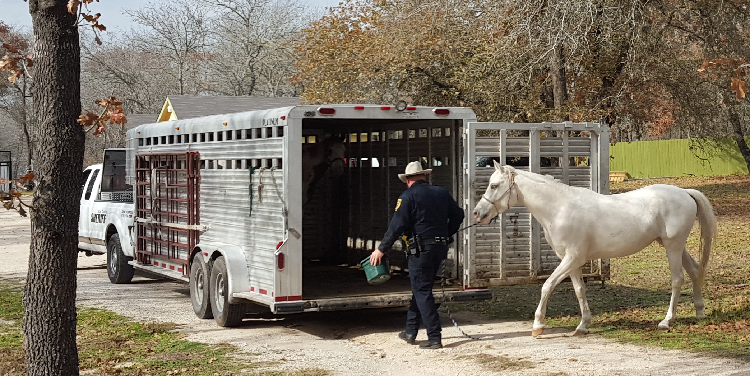 Lohrke told Sandy Oaks News the horses will be checked by a veterinarian and will be taken care of by the county for 18 days.  If no one claims them in that time then they will be auctioned off.  Lohrke also said horses at auction go anywhere from $50-$400.

As the second horse was being loaded into the trailer the group watching discussed animal control and stray dogs.

Hernandez said one of his dogs had been recently killed on his own property by a local stray dog.  He said he later found the attacking dog in his hog trap.

The deputy who had first arrived on scene voiced frustration at the inability of the Bexar County Sheriff’s Office to deal with animal control, dogs specifically, now that the area is a city.  He stated the City of Sandy Oaks needs to enter into a contract with the county for animal control so that officers could help people better.

The Sandy Oaks City Council passed an animal control ordinance on December 15, 2015.  Sandy Oaks News attempted to read the ordinance to provide what it says about horses and livestock, but the ordinance is not currently posted on the city’s website.  The city has previously taken up to 7 months to post ordinances on the city website.