At the February 11, 2016 City Council meeting Mayor Micki Ball slandered a citizen, falsely accusing her of representing the city and making threats.

The Mayor didn’t have anything to say about commencement services.  No one from the Council had anything to say regarding the topic either.  Instead, Mayor Ball used the time to speak to the audience about an issue involving the citizen.

Before talking about it, Mayor Ball turned to the City Attorney, Leslie Kassahn of Kassahn & Ortiz law firm, to ask if it was appropriate to read an email she received from Tiger Sanitation.  Kassahn said yes and Ball proceeded to look for the email on her phone.  When she was unable to find the email she began talking to the audience about Cathleen Recio, saying

There was an email message received last Friday from Tiger Sanitation and it was a little disturbing.  Basically, there is a resident who called to ask for some credits on their bill and they presented themselves as a board member.  And I can assure you there are no board members other than what you see sitting here at this table.  Miss Recio also then  proceeded to make a threat that if she didn’t get what she called for, what she asked for, that she had 300 residents who would cancel their accounts and would gladly take their trash to the dump themselves.  So Tiger Sanitation had called and they were confused to say the least because they thought they had a good relationship with the city.  So I just want to assure everybody, if you have a question about anything having to do with the city please ask somebody who is with the city.  If you’re relying on somebody that’s not with the city, chances are they don’t know the right answer and as a wise person once told me recently at work, their mom used to tell them “A closed mouth never gets fed.”  So if you don’t ask, you don’t know.

On February 15, 2016, Cathleen Recio shared an email that was sent from Frank Arredondo, a Sales Manager with Tiger Sanitation.  In the email, Arredondo says Recio didn’t call herself a board member.

The incident on February 11th is not the first time Ball has attacked Recio.  When Ball was Alderman she attacked Recio in 2015 on a social media website, telling her to “STFU”, a common internet shortening of “Shut The Fuck Up.” 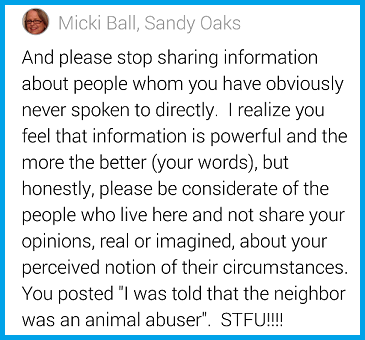 In the time frame that the city was accepting applications for Alderman positions, Micki Ball used screenshots of Recio’s old facebook page from her 2014 campaign to make it appear as if she were running for office again.  The screen shots were posted on a social media website that is moderated by Ball alone.

Ball and Recio were once on good terms with one another when they were both running for city council positions in the summer of 2014.  After taking office, Ball’s behavior toward Recio changed. In some City Council meetings, Ball allows members of the audience to speak without being interrupted, but makes loud shushing noises whenever Recio attempts to speak.

On February 16, 2016, Recio sent a letter to the city demanding an apology from Mayor Ball.  The letter stated

If I do not receive a public apology, correction, clarification and retraction, I will be forced to have my attorney file litigation against Mayor Micki Ball.

Recio requested that an apology be given within 14 days of receiving the letter.