By Texas state law, the maximum sales tax that can be imposed is 8.25%.  Of that, the state collects 6.25% which means that local municipalities and transit authorities can only impose an extra 2% of sales tax.

The Sandy Oaks City Council, however, went beyond the legal limit.

The Council Wanted The Maximum

Above is a portion of the August 16, 2014, agenda created by Mayor Clement for the very first meeting of the Sandy Oaks City Council.  A full version can be seen here.

The above is a portion of the official Minutes that recorded what took place at the first city council meeting.  A full version can be seen here.  These minutes were reviewed and approved by the city council on their August 28, 2014, meeting.

The VIA Metropolitan Transit Authority has had a sales tax of 1/2% since 1977.

The Sandy Oaks City Council approved an election that would result in a half % point more than the legal limit.

Someone Secretly Changed The Ballot Proposal

Here are the results of the November sales taxes: 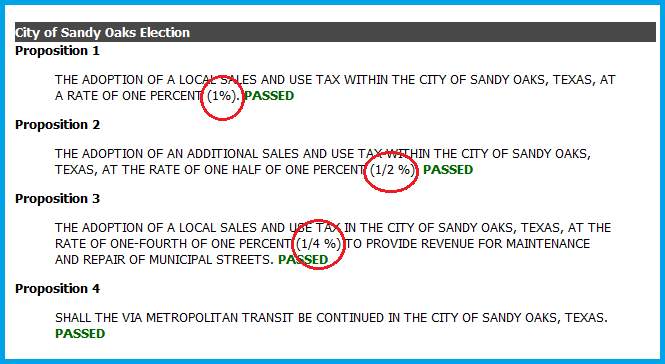 Whoever submitted the proposition paperwork to be on the ballot changed the 1/2 to 1/4.   The only people who would have been able to make any changes or had access or power to make changes would have been the Council members themselves, or Art Martinez de Vara, the City Attorney and only employee at the time.

The secret change still didn’t make the overall tax equal or less to 2%.  Because all of the new proposed sales taxes passed and because people voted to keep the VIA tax, the total tax rate for Sandy Oaks is now officially 2.25% and beyond the legal limit.

Mayor Jim Clement was caught outside the polling location at the November election telling voters that the sales tax would not be an increase in taxes and that the taxes already existed.

No, we can increase it a quarter of a penny, and then we’re topped out.

The set of sales taxes that Clement presented to the City Council, and that the City Council approved, would have been a full 2%.  The only way Clement could have known that there was room for an extra 1/4% is if he knew that the ballot had been secretly changed.

VIA is a quarter of a penny.

If VIA were in fact 1/4%, then the secret correction to the new sales taxes would make everything equal 2%.  However, VIA is actually 1/2%.

Shown above are the results to a tax rate locator provided by the Texas Comptroller Officer.  Anyone can look up the sales taxes in their area of Texas by going here.

This shows 2 things.  First, the sales tax for VIA is 1/2, not 1/4 like Clement thought.  Second, that sales taxes have not yet gone into place. 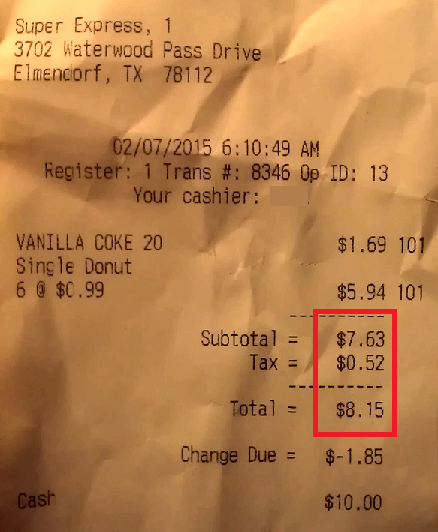 On November 11, 2014, Jeremy T. Gerlach for the Express News reported that the VIA chief of public engagement, Charlie Gonzalez, said that Sandy Oaks residents pay about $1,000 monthly in sales taxes to VIA.

This is less than half of what Art Martinez de Vara suggested as a proposed revenue back in July.

In August 2014, the Sandy Oaks City Council arranged for sales taxes to be a total of 2.5% which is over the limit set by Texas law by .5%.

In November, voters voted on a ballot that had been secretly changed to fix the error in math, except another error was made and the result is that now the City Council is responsible for a total of 2.25% in sales taxes, which is still over the legal limit set by Texas law by .25%